​Learn more about how Kids Together Playground came to be. 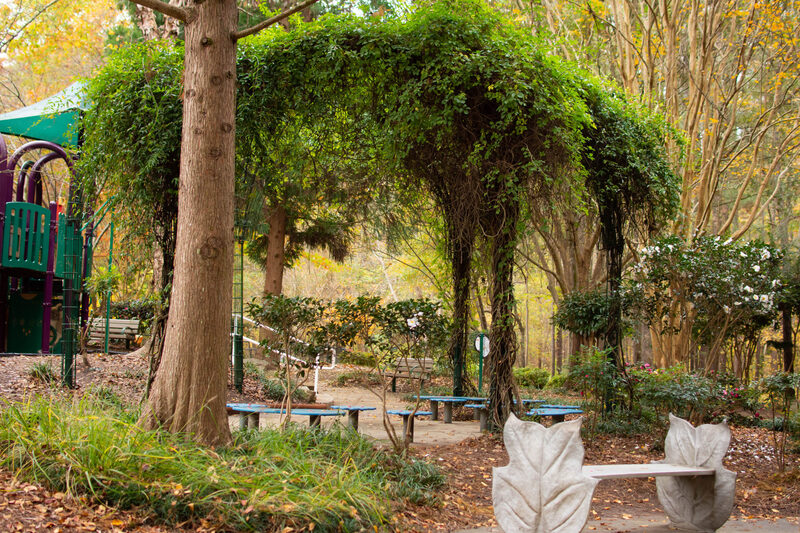 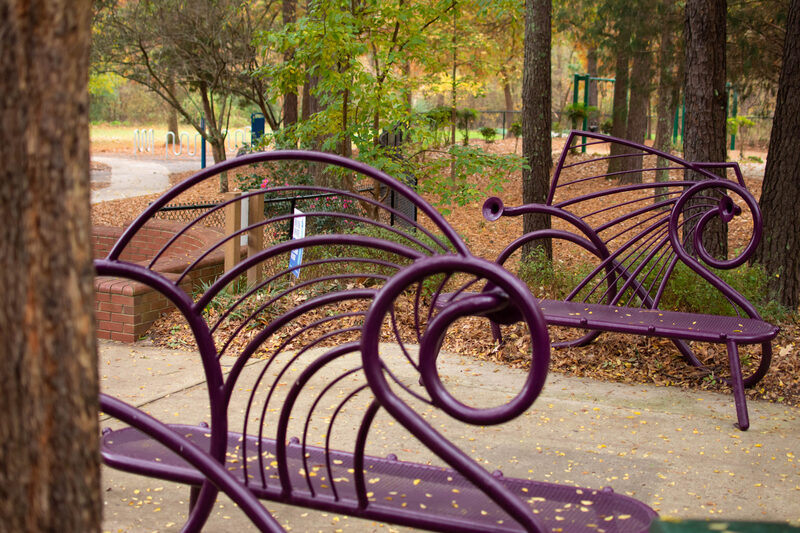 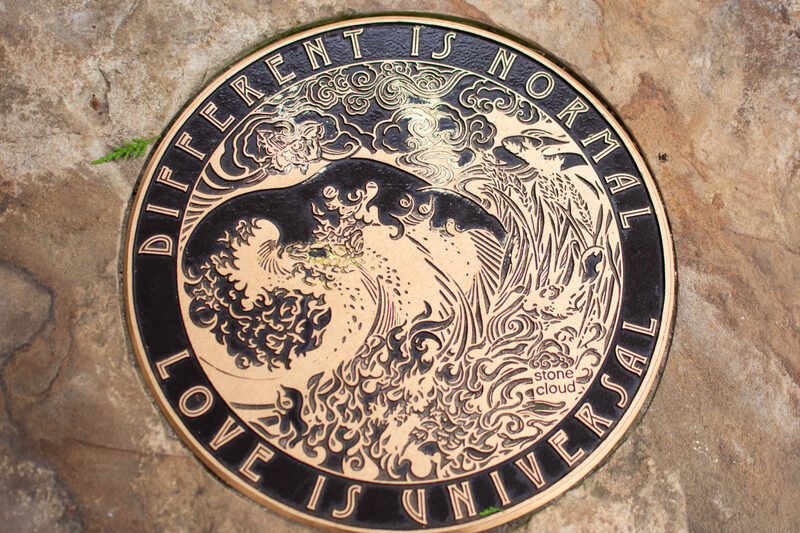 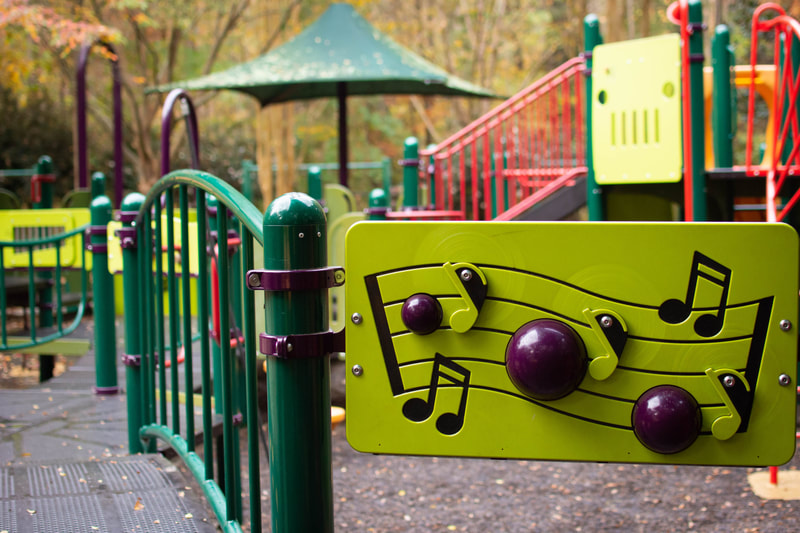 The People Who Led the Way

​Little & Little Landscape Architects, of Raleigh, designed the park. Robb Harrison is the landscape designer who took the lead in the design. He worked and NCSU Design School professor, Robin Moore (left) to design the playground. Robin is also the founder of the Natural Learning Initiative and a principal in the firm Moore, Icafano and Goltsman.

Beezle and the Kids Together Playground

​Beezle was strolling along Thurston Drive
He had time on his hands, from three-thirty ‘til five
He wanted to play, but he hadn’t a clue
Of where he could go, or what he could do.

He kicked at a rock and it rolled down the gutter.
He sat on the curb and started to mutter,
“There’s no place to play in this silly old town,”
That’s when he looked up – and there was Bruce Brown.

“Now, Beezle,” he said, “you’ve got me to thinkin’
There’s something we need,” and his eyes started twinklin’
A playground like one that they have in North Raleigh.
The All Children’s Playground, we’ll build one, by golly!”

But Beezle said, “Come on, that’s only a dream.
There’s no way to do it!” he started to scream.
But Bruce said, “Now, Beezle, there’s no time to grieve,
We’ll have to work hard, and we’ll have to BELIEVE.”

“Believe it can happen, believe it can be,
Believing is bigger than just you and me.
We’ll get out the word – tell our sisters and brothers
Our grandmas and grandpas, our fathers and mothers.”

“But that’s not enough,” Beezle started to wail,
“There’s no way we can do this, and what if we fail?”
“Now, Beezle,” Bruce said very matter-of-factly,
“We’ll get the job done,” he said most emphatically.

Then Bruce went to the Town and he planted the seeds,
For a playground that also would serve special needs.
He sold the idea that if they’d pick the site,
He’d head a committee to do this up right.

They all started working and spreading the word
That something was cooking – something real good.
But Beezle was doubtful, he cried, “It’s not funny!
An idea is fine, but where is the money?”

“I know we can find it,” Bruce said, “Just you see,
There are others out there who believe, just like me.”
And just as he said it, his words became true –
Standing right there, were Girl 1 and Girl 2.

The truth is the girls were named Helen and Kristin,
They wanted their sisters to have what they’re missin’
A place they could run, walk and play with great ease,
A place for all kids and all a-bilities.


“But who do these girls think they are,” Beezle huffed.
“They’re only just kids – it won’t be enough!”
But Bruce merely smiled and he said, “All is well,”
I’ve heard someone might help – her name’s Marla Dorrel.”

So Marla joined in, and with Kristin and Helen,
Everyone started in, workin’ and sellin’
And talking to people and raising the dough,
Enough that the Town said, “We’re ready to go!”

But Beezle was worried, he started to pine,
“So you’ve got a few bucks, what about the design?”

“Now, Beezle,” Bruce said, “I’ve talked with Herb Young,
And he’s talked with Mary, and Mary’s the one
Who can start the bid process and figure it out,
And Alice will help – so don’t bother to pout!”

Word went out across Cary and even beyond
That we wanted someone we could depend on,
We wanted the best, not the bottom or middle,
And that’s why we chose our friends Little & Little.

And Little and Little? Why, they sent us Robb,
And they also called Robin to help with the job.
And then Robin and Robb, well they needed advice,
So they gave public workshops, not just once, but twice.

They heard what we wanted, they knew something more,
They knew what kids needed – a place to explore,
A place filled with plants, lots of trees and bright flowers,
A place to co-mingle with nature – for hours.

But Beezle complained, “What – put kids in with plants?”
“They’ll tear through the beds and they’ll rip up their pants,
They’ll get mud on their seats and their hands and their nosies,
To say nothing of what they will do to your posies!”

But Robin, quite gently, just nodded and said,
“Why, Beezle, you see, this is good for your head,
Your brain needs excitement, the kind that’s created
When your senses sit up and become stimulated.”

So Robin and Robb they worked and they laughed
And they studied, researched and came up with a draft
A map that would show what this playground could be
If embraced by believers like you and like me.

And embrace it, we did, with our hearts and our brains,
And then we found others to do just the same.
One by one they all joined us, they all volunteered,
They pitched in their money, and all of us cheered.

Not just one or two, but hundreds came through
They bought the kids crafts and gave more money, too.
But Beezle was thinking, one day he exclaimed,
“We can’t have a playground without a good name!”

But Helen and Kristin said, “We know just how
To describe this new playground, right here and right now.
It’s only two words, and we know it rings true –
It’s called Kids Together – for me and for you.”

And, well, something happened, for Beezle it clicked.
He got this big smile, he jumped like he’d been kicked.
“It’s the best, it’s the greatest, it’s the most it could be
Kids Together it is, then – for you and for me!”

And he turned back to Bruce, who was standing aside,
With a grin, ear-to-ear, about half a mile wide.

And Beezle said, “Bruce, as I said from the start
If you want something done, you must follow your heart,
You must make some new friends, you must give and receive,
But most of all, work hard and always BELIEVE.”
Donate